Shelley has partnered with YWCA Hamilton to bring three pieces into the Putman Family YWCA lobby – “We Dance,” “Travelling Through,” and “Wishing a River.” Each piece not only brings colour and life to the walls of this beautiful space, but also tells stories about the Indigenous community.

Shelley was born in Niagara Falls, New York, is a member of the Turtle clan of the Kanienkehaka (Mohawk Nation) from Six Nations of the Grand River.

Her journey as an artist began when she was a child growing up on the Six Nations reserve just outside of Hamilton.

“My parents were craftspeople, meaning they made things, and they would go out and sell it at different places. And this influenced me quite a bit. I think it disciplined me, in such a way that you had to sit there and make something, and finish it,” Shelley said.

“But I think it also burned me out a bit, because I didn’t go into art right after high school. I didn’t want to keep up that process of making something.”

However, as Shelley got older, she became more and more drawn to creating art. She enrolled in art school in her 30s and started painting, eventually becoming a full-time artist.

Shelley says that she initially struggled with the concept of how her artwork would compare to the ideals of traditional, Eurocentric paintings.

“We’re bombarded with Wester European icons of art – you know, Michelangelo, Leonardo…and I thought, ‘I can’t compete with that. Their work is perfect,’” she said. “It was a big struggle just to get over that hump – what’s seen as art, and what’s seen as beautiful art. These are the examples that we are shown every day.”

“But at the same time, you get to a point in your life where you think, ‘Now I can do something else.’ I don’t have to work in marble – and it’s just a matter of paying attention to what is being made now, and looking at other art and artists as well.”

Shelley is inspired by world events, particularly by Missing and Murdered Indigenous Women and Girls and Two-Spirit People.

“I thought, what can I do as an artist that will lighten that journey? Because I don’t want to be stuck in this hole of dread and darkness. By painting these paintings, it gave me an opportunity to make a path. I used canoes as a metaphor as an escape where you can get in the canoe and go down the river.”

Shelley was gracious enough to speak about each piece that now resides in the Putman Family YWCA Lobby. Please enjoy Shelley speaking about “Wishing a River,” “We Walk,” and “Traveling Through.” 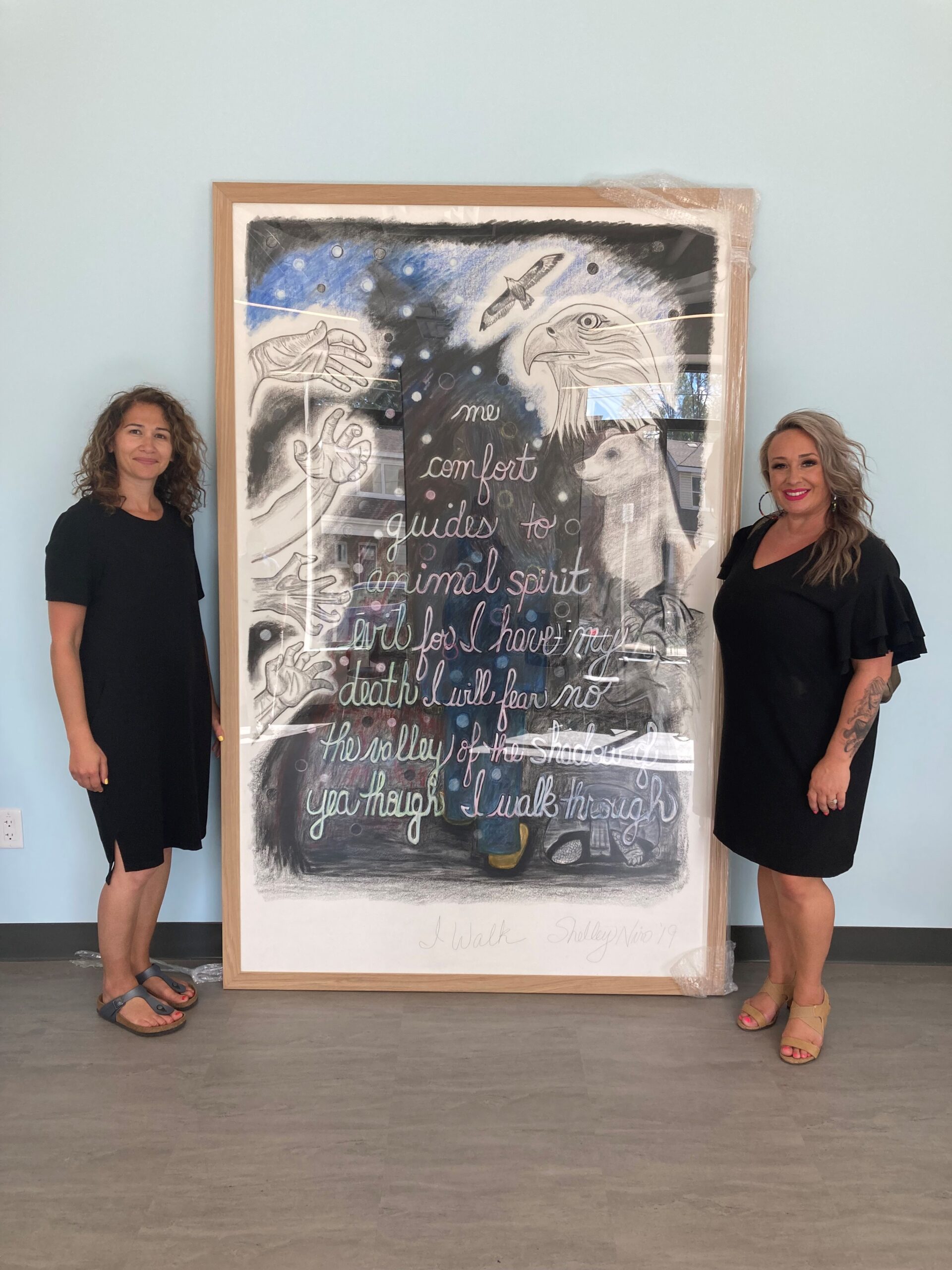