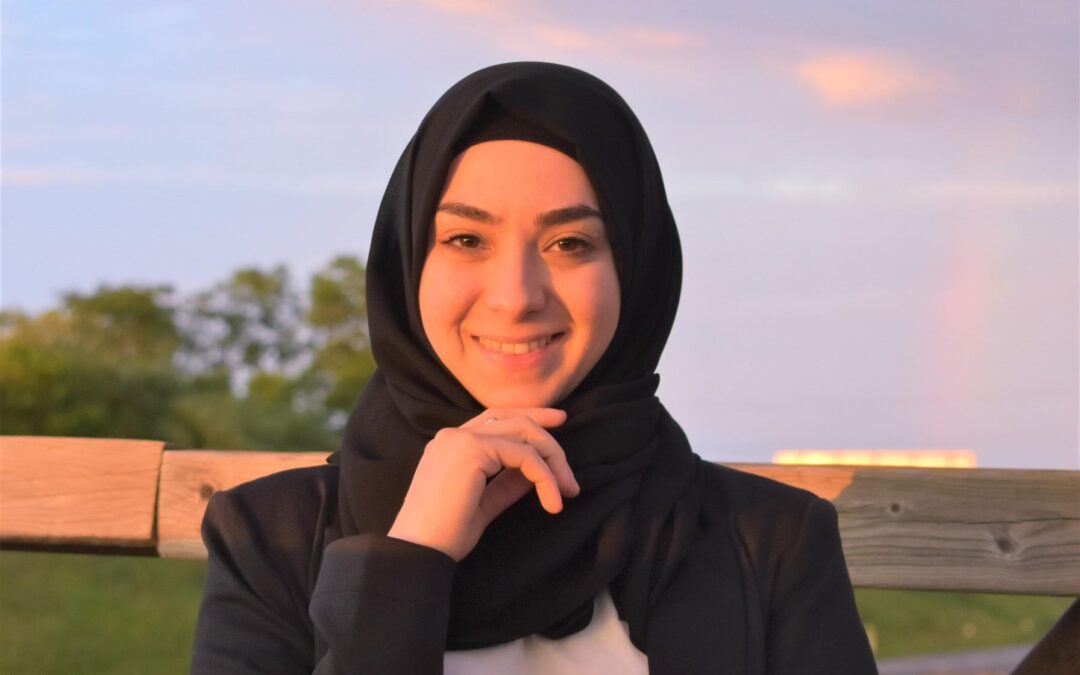 Abrar, who spent much of her childhood in Aleppo, Syria, watched her entire community crumble when the civil war erupted in 2011.

When she immigrated to Canada in 2017, she slowly built a community of her own – and in the process, began helping others who were left traumatized by war.

Abrar is the founder of ABRAR Trauma and Mental Health Services, an organization dedicated to providing affordable, trauma-informed, art-based, and culturally sensitive mental support for diverse newcomers and immigrant populations.

“What motivated me was that I wanted to be part of the trauma and healing process for newcomers, because I went through that same struggle,” said Abrar, who was recognized as YWCA Hamilton’s Honourary Woman of Distinction in 2021.

“I didn’t find the mental health and the trauma treatment support when I immigrated, and I struggled with a lot of depression and trauma treatment at that time. I felt there was a gap, and that it needed to be filled.”

Since the launch of ABRAR Trauma and Mental Health Services in 2020, the organization has grown to include 25 staff, the majority of whom are women. Abrar has also launched several mental health care initiatives that have been recognized across Canada, including “In This Together,” a national campaign advocating for a post-pandemic mental health recovery plan for youth with a focus on those who come from marginalised backgrounds in Canada.

“It’s not easy to build something, especially if you don’t have a lot of resources,” she said. “I myself am still a newcomer. But I feel a duty towards the people I work with. It’s duty and passion that motivates me to keep going.”

Abrar’s journey to her current life in Canada was a long one. Abrar spent her earliest years in Hamilton – her parents were originally from Syria – but moved back to Aleppo with her family in 2000, when she was six years old. Her childhood in Syria was peaceful and happy.

Everything changed for Abrar’s family when the civil war broke out. Abrar was only 17 when the war began, and she was just beginning her psychology degree. However, living through the brutal and deadly war was incredibly traumatic for Abrar and her family – there was no water, no electricity, and no safety.

When her parents went back to Canada in 2015, Abrar stayed behind, hoping to continue her work as a trauma counsellor and complete her degree. But in 2017, after years of living in a war zone, she felt she could no longer stay in Aleppo.

“At the end of 2017, I was like, “I don’t think I can survive much longer.”” The war had begun to take too much of a toll. “The destruction you see in your city – the buildings turned to dust,” she recalled.

Today, she helps others who have experienced war and trauma build back their lives – particularly children. Recently, she has spoken out in the media and through other channels about how the war in Ukraine is creating deep trauma for the children forced to flee, or who are encountering war in their home country.

“It’s important to be advocates for peace, and how children should not suffer based on what’s happening in the world,” she said. “It’s indescribable, the impact on their mental well-being.”

For Abrar, it’s important to build other women up not only by growing her business, but by leading by example in the face of adversity.

“Being someone with an accent, new to the country – and being marginalized as a hijabi Muslim woman – it’s not always easy,” she said. “But if you pursue your passion, you will achieve it – regardless of the challenges you may face.