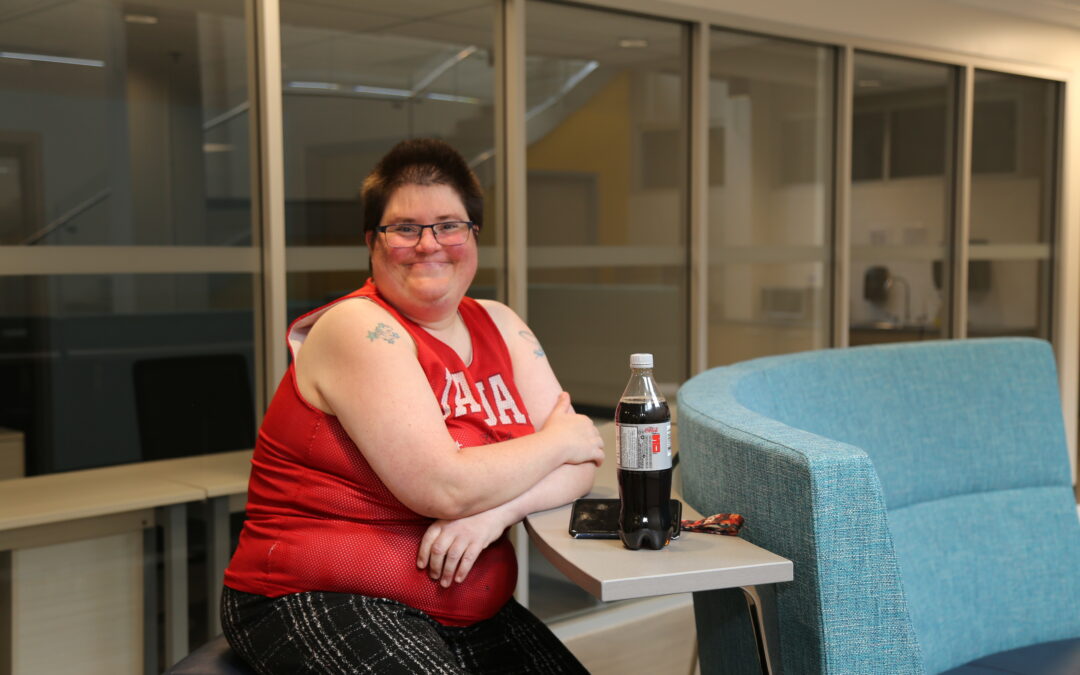 Brenda’s new apartment at the Putman Family YWCA on Ottawa Street is more than just a home – it’s a sign of their independence.

The second-floor apartment in the new, state-of-the-art building that Brenda shares with her beloved cat, Sarah Lee, is the first place where Brenda has ever lived alone.

“It’s totally cool,” said Brenda, who moved into the building in June 2022. “It was kind of scary at first, but now I’m getting a little bit better. It’s helping me do things outside of my comfort zone, which is awesome.”

Brenda, who lives in one of the 15 units at Putman dedicated to adults living with a developmental disability, says the best part of living at Putman so far has been the friends she’s made – that, and the popular Bingo nights held every Thursday. Brenda has also become known in the building for making rainbow loom bracelets, and for always joining in with the events and festivities in the building.

“Since day one, Brenda’s been out there – showing up at programs, attending events – they even led a beading workshop,” said Lilly Pagliacci, a Housing Support Worker at Putman. “She is so cool, shes’s energetic, and she’s involved in the Putman community.”

Brenda came to Putman from her Mom and stepfather’s home in London, Ontario. Prior to that, Brenda had been living with her father – however, his death in 2021 precipitated Brenda’s move to their Mom’s house, then into Putman.

Brenda says she has been able to show her aunt – her father’s sister – around the building, including the sixth-floor residents lounge, a space reserved for residents to gather, relax, and create community.

“She got to see upstairs on the sixth floor and see where I hang out all the time,” Brenda said. “She was amazed by how good this place is.”

Brenda says she isn’t the only one who loves her new home. As Putman is a pet-friendly building, Brenda was able to bring her closest companion when they moved in – her cat, Sarah-Lee. Sarah-Lee has been enjoying lying in the sunshine in Brenda’s apartment, thanks to the large windows in her new home.

“She is my little baby girl,” said Brenda. “She loves her window time.”

Brenda also was able to bring Sarah Lee to a recent pet clinic at Putman, hosted by the SPCA.

“It cost me $10 to get a little checkup,” Brenda said. “And she was in perfect health.”

While she is nervous to start again on her own, she is excited to start her new job – and further her independence – this fall.

Brenda says she isn’t the only one who loves her new home. As Putman is a pet-friendly building, Brenda was able to bring their closest companion when they moved in – their cat, Sarah-Lee.